To request an interview or speaking engagement, please fill out the Contact form. 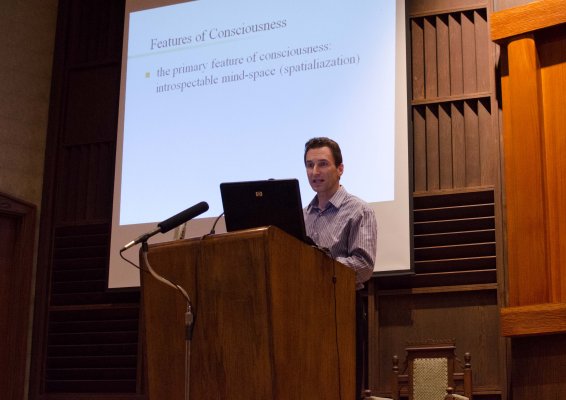 Marcel Kuijsten is available to present his lecture, “An Introduction to Julian Jaynes’s Theory,” in 30, 60, or 90 minute formats.

An Introduction to Julian Jaynes’s Theory
Presented at the The Julian Jaynes Society Conference on Consciousness and Bicameral Studies
June 5–8, 2013, Charleston, West Virginia

The Gods of Mesopotamia and the Presentist Fallacy
Presented at the The Julian Jaynes Society Conference on Consciousness and Bicameral Studies
June 5–8, 2013, Charleston, West Virginia
Some individuals have an initially skeptical reaction when first exposed to Jaynes’s theory. In the first part of my talk, I introduce a model for better understanding these skeptical reactions. I propose that skeptical reactions to Jaynes’s theory (or any new idea) are frequently the result of a conflict with existing false premises or beliefs. Examples of false premises or beliefs relevant to Jaynes’s theory include: the idea that consciousness evolved biologically, mystical views of consciousness such as panpsychism, and the presentist fallacy (as it pertains to Jaynes’s theory, imposing a modern psychology on ancient cultures and the translation of ancient texts). Finally, critiques of the theory resulting from a conflict with false premises or beliefs can often be categorized in one of three ways: binary or “either/or” thinking, a narrow focus on one or two points of evidence at the expense of the entire patter of evidence, and misunderstandings as to Jaynes’s actual claims, resulting in myths and misconceptions. In the second part of my talk, I will explain one false premise, the presentist fallacy, and provide representative examples. I will then demonstrate how the pattern of evidence can be used to counter critiques of Jaynes’s theory that are based on the presentist fallacy, using the evidence for bicameralism in Mesopotamia as an example. In the process, I introduce new evidence for Jaynes’s theory that has not been previously discussed.

Voices, Visions, Dreams, and the Limits of Consciousness: Reappraising Julian Jaynes’s Theory of Consciousness and Bicameral Mind — 30 Years of New Evidence (with Prof. Brian J. McVeigh)
4–hour Workshop presented at the Toward A Science of Consciousness conference
April 7–12, 2008, Tucson, AZ

Auditory Hallucinations and the Bicameral Mind: New Evidence for Julian Jaynes’s Neurological Model
Presented at the Toward A Science of Consciousness conference
April 7–12, 2008, Tucson, AZ
Thirty years ago the psychologist Julian Jaynes presented a compelling and controversial theory of consciousness in The Origin of Consciousness in the Breakdown of the Bicameral Mind. In it he argues that consciousness (roughly, ‘introspective mind-space’) did not arise far back in animal evolution but is a learned process based on metaphorical language, and that prior to it’s development humans operated under a previous mental model called the bicameral (‘two-chambered’) mind. According to Jaynes, the bicameral mode of thinking evolved along with language to facilitate information exchange between hemispheres and served as a form of control system to hold large societies together. In bicameral societies, decision-making in stressful situations is based on auditory hallucination — similar in many ways to the command hallucinations experienced by modern people with schizophrenia.

Jaynes proposed a neurological model for the bicameral mind, reasoning that the areas responsible for auditory hallucinations would be the right temporal lobe areas corresponding to the language areas of the left hemisphere. He based this on three primary areas of research: studies that demonstrated auditory hallucinations in the right hemisphere under electrical stimulation; research that showed right hemisphere language competence; and studies of split-brain patients that demonstrated that the brain hemispheres can function independently.

According to Jaynes, the right hemisphere issued behavioral commands in the form of auditory verbal hallucinations to the acting left hemisphere. The individual experienced these voices as the commands of their tribal leader, king, or “the gods.” Although Jaynes found a great deal of evidence to support the general idea in ancient texts and history, he knew that it would be decades before neuroscience progressed to the point that his neurological model could be tested.